The biggest risk for retirement is not knowing how long you will live. A new 65-year-old retiree may live anywhere from another year to more than 40. If you live longer, how long will your retirement plan need to support your budgeted expenses? Will you have the resources to sustain spending over that longer lifetime?

A long life is wonderful, but it is also costlier and a bigger drain on those resources. Half of the population will outlive what the statistics say they will, and our lives will only get longer as science finds new ways to keep us healthy. And some people may fear outliving their resources even more than they fear death. That can create a paralyzing effect when it comes to their retirement spending. 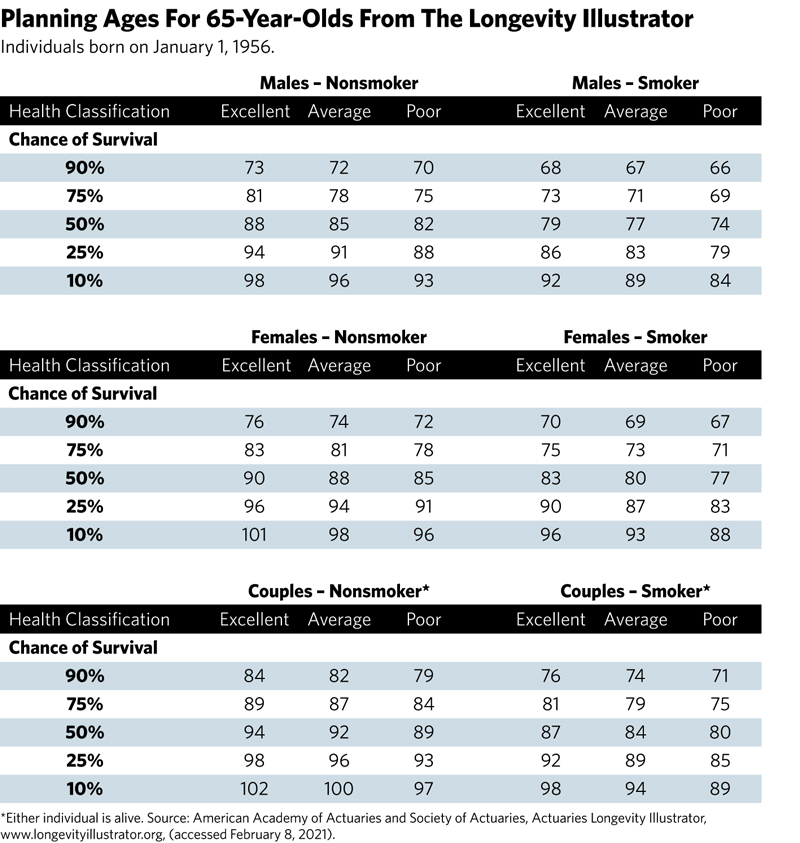 Moshe Milevsky coined the term “longevity risk aversion” to describe how people feel about outliving their retirement assets. Beyond mortality statistics, this aversion is what will drive a retiree’s decision about an appropriate planning age. Those with greater fear of outliving their wealth will try building a financial plan that can be sustained to a higher age, one they are much less likely to outlive.

Some people decide to “front-load.” They think it’s best to enjoy a higher standard of living and spend money while they can early in their retirement, and then make cuts to their spending later when they need to. Then there are others who “back-load.” They’ve taken into account that they’ll live a longer life, assume their current plan won’t get them where they need to be, and thus either spend less money early on to stretch their assets—or turn to products with lifetime income protections. These people do not want to reduce their standard of living at advanced ages or be a burden to their children.

This is the trade-off: either live a more robust lifestyle today by accepting a shorter planning horizon or protect your lifestyle in a longer future by spending less today. People must determine how little spending they are willing to accept today so they won’t have to deplete their assets to live a longer life. At the same time, as they worry more about outliving their assets, they’ll find annuities with lifetime income protections more attractive. While the annuity-based cost for lifetime income remains the same, people also are going to want more in assets to feel comfortable living longer.

What’s the best way to choose a planning age? When determining longevity, it may seem natural to base calculations on the aggregate U.S. population, but clear socioeconomic differences have been identified in mortality rates. Higher income, wealth and education levels correlate with longer life spans.

It may not be that more income and education cause people to live longer, but perhaps there are underlying characteristics—that some people are able to enjoy a more long-term focus, and that, in turn, may lead them to seek more education and to practice better health habits. The very fact that you are reading this somewhat technical article about retirement income suggests you probably have a longer-term focus and should at least expect to live longer than the average person (accidents and illnesses aside). And that means mortality data based on population-wide averages are underestimating your potential longevity.