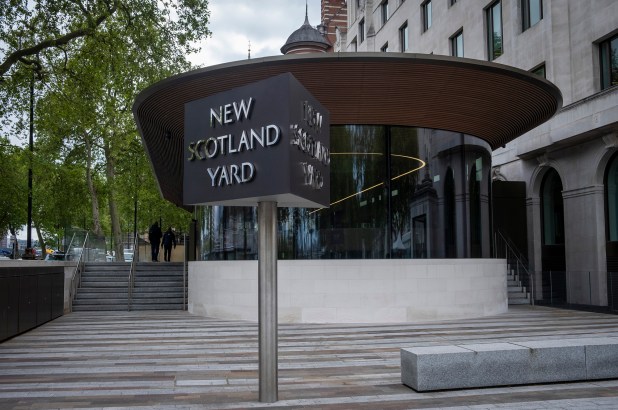 The headquarters of the Metropolitan Police, who recently seized almost $250 million in cryptocurrency from a money laundering investigation. In Pictures via Getty Images

British police announced Tuesday that they seized almost $250 million in cryptocurrency, making it the country’s largest such capture ever amid an ongoing investigation into international money laundering.

The announcement by the Metropolitan Police’s economic crime command comes just weeks after they announced another record-setting haul of about $158 million in crypto.

The recent seizures, totaling more than $400 million, are part of an active probe into money laundering after organized crime groups began using cryptos to wash their dirty money, authorities said.

McNulty added that authorities have “have highly trained officers and specialist units working hard in this space to remain one step ahead of those using it for illicit gain.”

Police arrested a 39-year-old woman on suspicion of money laundering after the first haul was discovered in June.

She was released on bail, but authorities said she’s been interviewed “under caution” over the recent $250 million discovery.

“We have worked hard to trace this money and identify the criminality it may be linked to,” detective constable Joe Ryan said.

“Today’s seizure is another significant landmark in this investigation which will continue for months to come as we hone in on those at the centre of this suspected money laundering operation.”