There’s no slowing down for Erin Jackson. After taking gold at the 2022 Winter Games in Beijing, the American speed skater already has her sights set on the next Olympic cycle; but first, she’s soaking in all the “excitement” of her historic win.

With her agile performance on the ice, the 29-year-old became the first Black woman to ever win an individual medal in the women’s 500m speed skating event. Her achievement also marks the first time that a U.S. woman won gold in speed skating at the Olympics in nearly 30 years. For Jackson, the accomplishment brought up so many emotions—from “an overwhelming sense of gratitude to so many people who made it all possible,” to “pride, excitement, astonishment [and] even a bit of relief,” she tells STYLECASTER in an email as part of her partnership with Cheribundi. “I was crying so hard I put the medal on backwards.”

Jackson’s journey on the rink makes her win especially gratifying. Like many Olympic athletes, the Florida native has trained hard for her spot on the U.S. team—yet her path to the Winter Games looked a little different than most. As a child, Jackson got her start at a local roller rink, whizzing around on quad skates before eventually trading artistic styles for the speed of inline skates. Soon enough, Jackson reached the pinnacle of her success on wheels, competing at top-level races and roller derby games across the world. But to become an Olympian, she had to make another switch. This time, it involved the ground—and her footwear—changing out from under her.

The first time Jackson put on a pair of ice skates was in 2016. Just two years after stepping onto the ice, she became the first Black woman to represent the U.S. in speed skating at the 2018 Winter Games in PyeongChang. Four years after that, she made it to the podium. As one of the few women of color at the Winter Olympics—let alone in the sport of speed skating—Jackson hopes young Black and brown girls can follow in her fearless footsteps. “I hope they can see that most often, limits are self-imposed,” she tells STYLECASTER. “Maybe this will inspire another girl of color to look for an opportunity that inspires them in unusual places.” 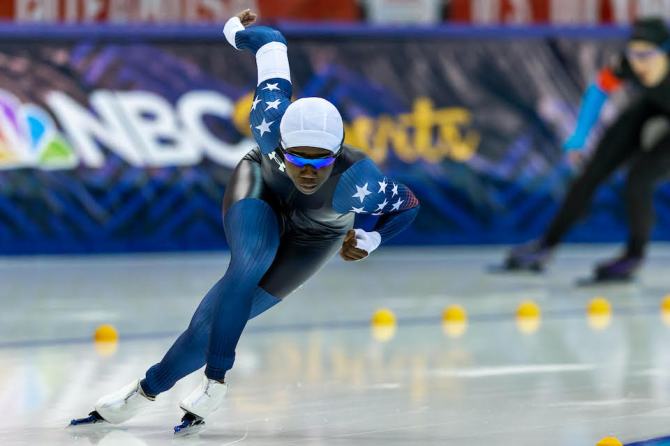 Image: Courtesy of US Speedskating.

Clearly, Jackson lives by her own advice. Off the ice, the athlete is also a proud academic. She holds a Bachelor’s Degree from the University of Florida, where she graduated with honors from the Materials Science & Engineering program. Looking back, Jackson wishes she could tell her younger self that it’s possible to balance both of her passions. “You’re doing the right thing by prioritizing your education and chasing your dreams. You CAN do both at the same time,” she says. And it’s what she intends to do: In the future, Jackson hopes to earn her Masters Degree and pursue a career in biomedical engineering.

But first, the ice is still calling to her—and with that, comes more training. For Jackson, it’s an all-day process. “It depends on the time of the year, but we usually have one on-ice training session in the morning for a few hours, followed by some body-care like stretching, therapy, or massage,” she says. “Then lunch, followed by a short break, then a second training session that is usually weights, a bike ride, or a series of off-ice skating exercises.”

When you’re training as hard as an Olympian, recovery is incredibly important. One of Jackson’s “everyday” care essentials is Cheribundi, a sports performance drink packed with antioxidants. “For me, Cheribundi is something I make sure I bring with me. It’s part of my everyday recovery program,” she tells STYLECASTER, noting that she also makes sure to carry the brand’s Concentrate pouch “whenever” she’s on the road. 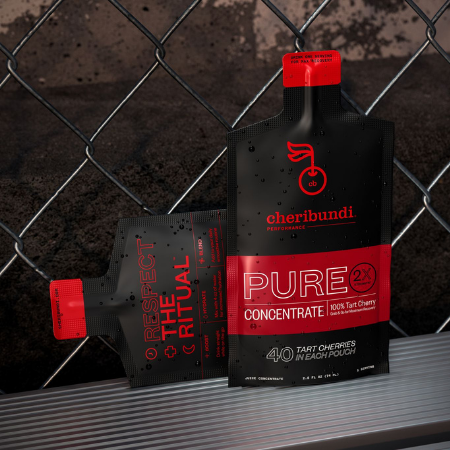 Jackson also sings the praises of self-care. “Massages, or using a massage gun, foam rolling, stretching, sometimes an ice-bath,” are all part of her physical process. “From the inside-out angle I’m trying to eat cleanly, drinking a lot of water, and I’m always drinking Cheribundi to reduce inflammation and speed up recovery,” she adds.

Our mission at STYLECASTER is to bring style to the people, and we only feature products we think you’ll love as much as we do. Please note that if you purchase something by clicking on a link within this story, we may receive a small commission of the sale.