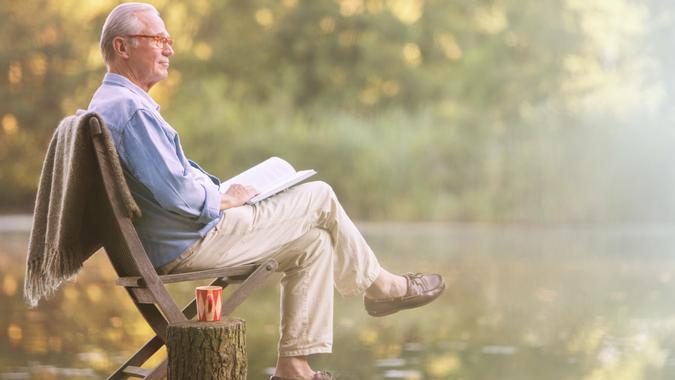 It’s long been a rule of thumb that you should have $1 million saved before you retire — and you may actually need to have close to double that in many cases. But most retirees have far less. A recent survey conducted by Clever found that, on average, retirees have just $191,659 saved for retirement.

Here’s a closer look at the alarming financial state of retirees in America.

Explainer: 30 Reasons It’s Hard To Retire at 65
Learn: Here’s Exactly How Much Savings You Need To Retire in Your State

Most Retirees Believe They Will Outlive Their Savings

According to the survey, 51% of retirees believe they’ll outlive their savings entirely — which is not too surprising given how little many have saved for retirement.

“Even more grim, 65% of retirees reported that they’re not financially secure,” said Taelor Candiloro, research analyst at Clever Real Estate. “So not only are most retired Americans financially insecure, but they’re worried about reaching a point where they have to drastically adjust their standard of living.”

The Majority of Retirees Have No Retirement Savings

The high percentages of retirees with little to nothing saved may have to do with factors beyond their control.

Read: Jaw-Dropping Stats About the State of Retirement in America

“We’ve certainly seen multiple health, environmental and financial crises surface in the last few years — all of which have increased financial strain on Americans,” Candiloro said. “There are also a plethora of social and economic variables that impact how Americans are able to accumulate wealth during their working years. All of these things collectively impact our ability to save for retirement — or our ability to retire at all for that matter — and could contribute to the lack of savings retirees are reportedly experiencing.”

Another factor could be the lack of access to employer-sponsored retirement savings plans. Nearly one in three retirees (31%) said that their company didn’t offer 401(k) plans or pensions.

Without retirement savings, retirees are dependent on other income streams to cover their everyday expenses. The most common source of retirement income among retirees is Social Security, with 79% of those surveyed citing it as a source of income. However, the average monthly Social Security payment is just $1,555, which likely is not enough for most retirees to cover their expenses.

“Retirees may be relying almost entirely on their Social Security payments, which can get precarious, especially since 75% of retirees reported carrying debt through their retirement,” Candiloro said.

Watch Out: 14 Key Signs You Will Run Out of Money in Retirement

More Than Three-Quarters of Retired Americans Have Debt

Because so many retirees have little to no savings, it’s not too surprising that the majority are carrying debt. The most common types of debt held by retirees are credit card debt (67%), mortgages (37%), car payments (32%) and medical bills (22%).

“Being in a financial situation where you’re required to allocate some of your monthly funds towards things like credit card payments can impact your savings long term and mean that your standard of living decreases once you retire,” Candiloro said. “Fifty percent of retirees reported spending less on travel after retiring, and 49% said they spend less on dining out, while retirees reported spending more on medical bills and health care.”

“You can always invest, and every dollar counts,” Candiloro said. “If you’re already retired but want to boost your savings, building a relatively safe or mixed investment portfolio can help to build a reliable stream of income (however small) to contribute to your bills and expenses.”

Gabrielle joined GOBankingRates in 2017 and brings with her a decade of experience in the journalism industry. Before joining the team, she was a staff writer-reporter for People Magazine and People.com. Her work has also appeared on E! Online, Us Weekly, Patch, Sweety High and Discover Los Angeles, and she has been featured on “Good Morning America” as a celebrity news expert.