Yuma Kagiyama emulated his two-time Olympian father by earning a spot of his own at the games in Beijing and then put his family’s name into lights by winning a silver medal.

At the age of 18, Kagiyama scored the all-time third highest free skating score in the team event when he landed a quad loop for the first time before beating his two senior, established star countrymen, Shoma Uno and Yuzuru Hanyu, to the silver medal in the singles. 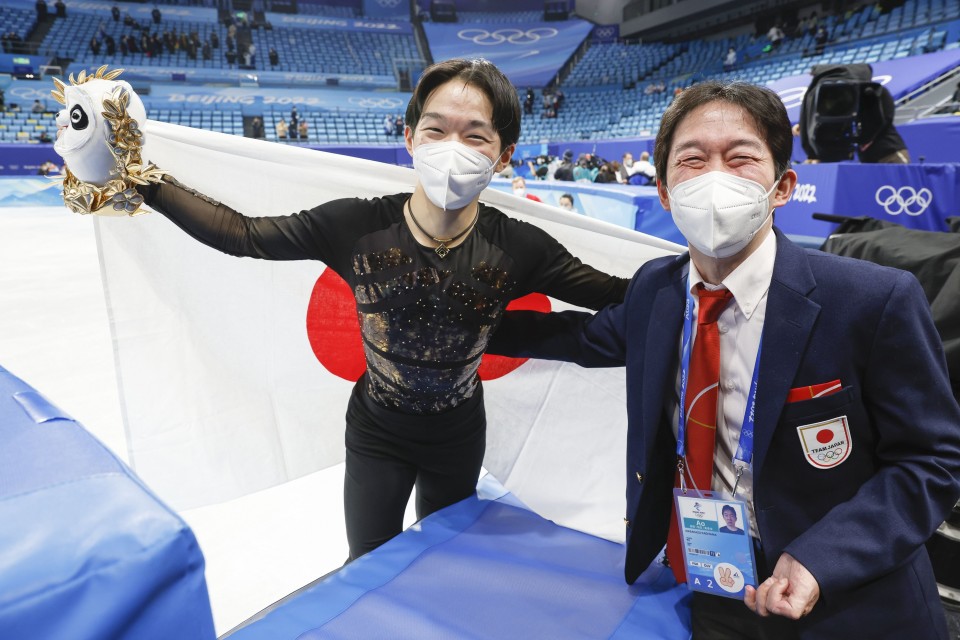 Yuma Kagiyama (L) of Japan celebrates after taking silver in the men’s figure skating at the Beijing Winter Olympics on Feb. 10, 2022, at the Capital Indoor Stadium in Beijing, with his father and coach Masakazu. (Kyodo) ==Kyodo

“My father congratulated me. We’ve strived and experienced things together these past few years aiming for the Olympics. That led to me getting the sliver and it was great sharing that joy,” said Kagiyama in Beijing.

Yuma was on skates by the time he was five and under his father’s tutelage, which included an unorthodox jumping drill, a future Japanese gem was being uncovered.

“Mentally, he’s weak,” said Masakazu of his son, despite the seemingly unbreakable confidence he displays born from his near 365-day-per-year on-ice training regime.

His impeccable quad jumps earned additional points in his two Beijing Games events. What set Kagiyama apart was his knack for taking off at full speed, something that has been a long time in the making. 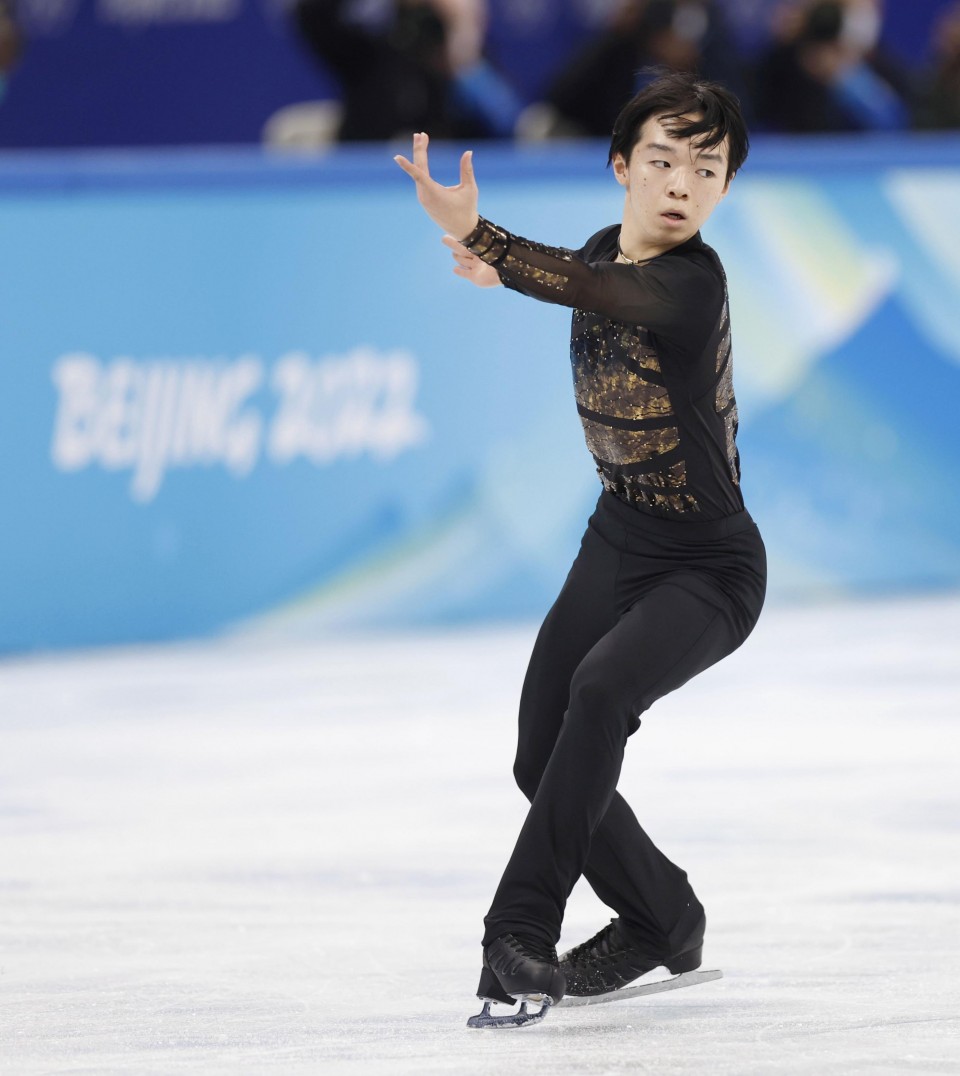 Yuma Kagiyama of Japan competes in the men’s figure skating free skate at the Beijing Winter Olympics on Feb. 10, 2022, at the Capital Indoor Stadium in Beijing. (Kyodo) ==Kyodo

“I made it normal for him before he had the sense of fear, when he could only do single jumps,” said Masakazu, admitting he chased his son around the rink to push his pace to the maximum before making him jump.

“I’ve never coached him to jump high. The speed makes everything click.”

Masakazu suffered a hemorrhage in 2018 and was hospitalized for five months, but Yuma could rely on his grandmother as he trained alone before his father rejoined him at the rink on the way to a second-place finish at the world championships in March 2021, in his first senior season.

His Olympic season did not start well as he struggled with his quad loop and he hit rock bottom when he missed two of his three jumps to sit seventh after the short program at Gran Premio d’Italia, the third World Cup event, in early November.

His father told him to go back to basics and it galvanized his son to come back to win with a superb free skate before he also won the Internationaux de France two weeks later.

“I want to become even more of an all-rounder, one who gets rated in many elements such as impressions and steps like (Nathan) Chen, Hanyu and Uno,” Kagiyama said after winning silver in China.

The father-son duo have a plan to master five quad jumps — but not the axel — ahead of the new season.

“It would be done fast if he took them seriously, in a month or two,” said Masakazu. Then, the next goal is five rotations on the salchow and toe loop.

“He can vie to be the world’s best (with the salchow and toe loop). His jumps have height, distance (from takeoff to landing) and it’s about getting that extra spin.”

“Mr. Hanyu has been on quad-and-a-half (quad axel). We’ll aim beyond that.” 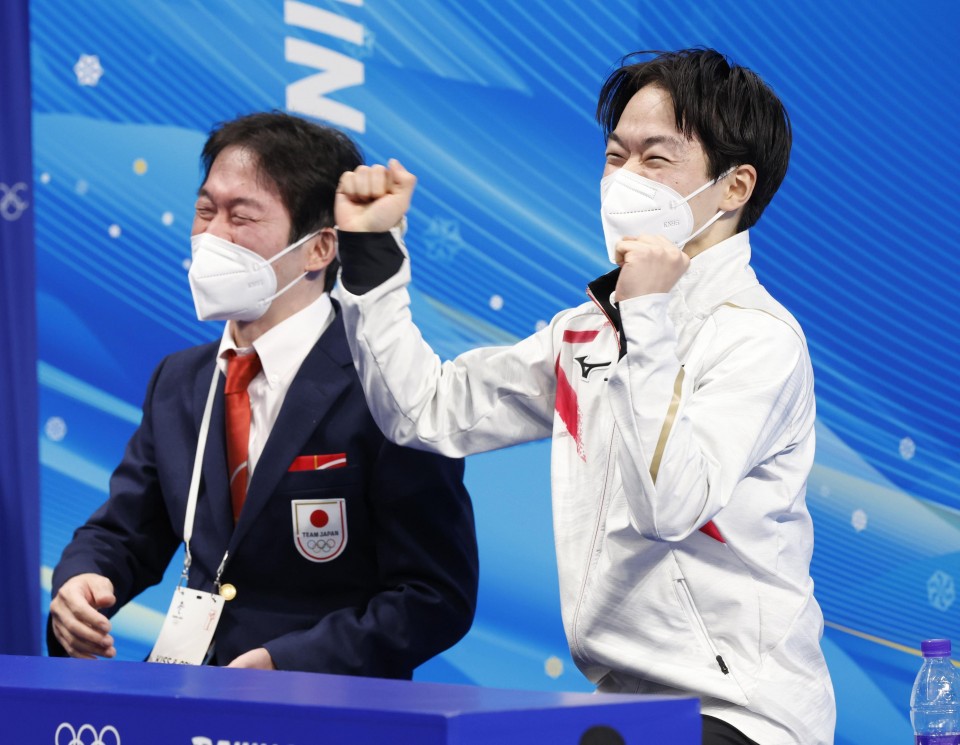 Yuma Kagiyama of Japan reacts after seeing his free skate score at the Beijing Winter Olympics on Feb. 10, 2022, at the Capital Indoor Stadium in Beijing, with his father and coach Masakazu (L). (Kyodo) ==Kyodo