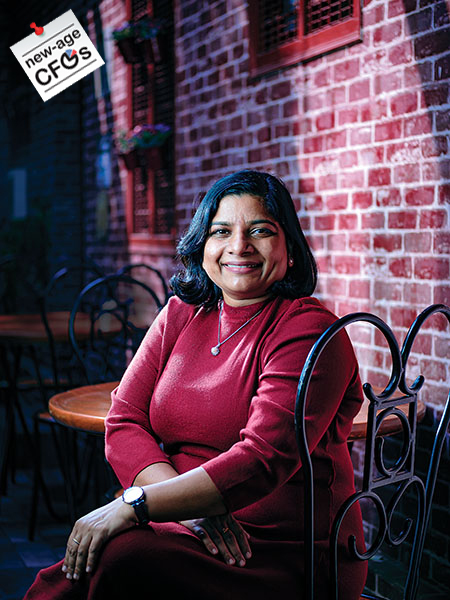 I have been fortunate to have been a part of startups that are built with their heart and human touch: Deena Jacob, CFO, Open
Image: Nishant Ratnakar for Forbes India

Back in 1997, growing up in Mallappally, Kerala meant that one would either take up medicine or engineering as a profession. Keeping this in mind, Deena Jacob opted for science in high school, studying physics and mathematics. Though she enjoyed both subjects, Jacob felt her calling was in business and commerce.

Soon after school, she started preparing for the Chartered Accountants (CA) foundation course. “No one in my family was into commerce, so I didn’t even know what CAs do and what accounts look like,” recalls Jacob. But she took it up as a challenge, since she had always loved watching and understanding businesses. “Nine months into preparation for the foundation course, I still didn’t understand what debit and credit meant,” she says laughing.

After becoming a chartered accountant, she took up a job at Deloitte as an assistant manager, knowing very well that she was “not cut out for an audit kind of profession”. After switching multiple jobs within the industry, she realised building startups was what she enjoyed the most. She joined app aggregator Tapzo as CFO, moving on to cab-hailing firm TaxiForSure as the head of finance and finally to home decor marketplace Zansaar.

In 2017, along with Anish Achuthan, Mabel Chacko, and Ajeesh Achuthan, Jacob launched Open, a neo-banking platform. “I met them [Anish, Mabel and Ajeesh] when they were running their previous startup, as they solutioned for our payments need while at TaxiForSure. I was an impressed and delighted client,” says Jacob.

Four years later, Open is a market leader and counts 1.3 million small businesses as their clients. The company processes annualised transactions of around $20 billion. The platform provides a dashboard, both on desktop and mobile, where users—mostly small and medium enterprises—can monitor their expenses, seek loans, collect payments, and manage their financial operations, thereby automating book-keeping.

“Deena is Open’s powerhouse of knowledge on everything in finance, from fundraising to futuristic financial planning. It is commendable what she has achieved over the years as an entrepreneur, leader, and one of the most sought-after women in finance in the country,” says Mabel Chacko, co-founder and COO, Open. In October 2021, the startup raised $100 million in a funding round led by Singapore’s sovereign wealth fund Temasek, along with participation from other new investors like tech major Google, card operator Visa and Japan’s SBI Investment. 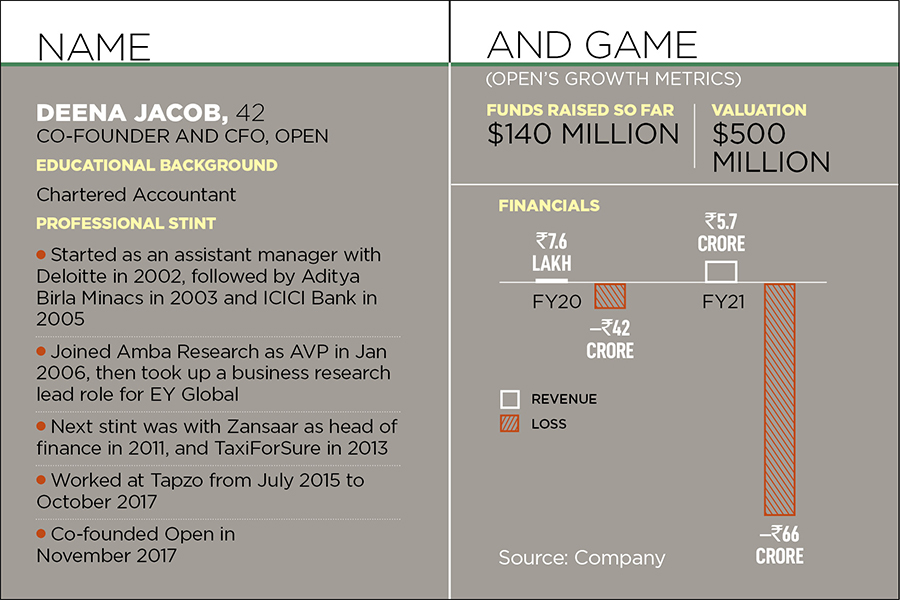 Though Jacob is a CA and turning a CFO would have meant a logical progression in her career, there is a big difference between CA-turned-CFOs for traditional companies versus those of startups. Though having a finance background has an added advantage, she says, “with new-age businesses, traditional views often don’t work”. For instance, she explains, “if a CFO with a conservative mindset were to look at the P&L of a startup, the bottom line would spook him or her, since they are so used to looking at profitability”. She believes it is necessary to be flexible and prefers to have a good mix of fresh blood and experience in her team.

As a “new-age” CFO, the key lies in balance. “One can’t go overboard in terms of spending capital in expansion, but at the same time, you have to be willing to experiment too—some of these might work, some might fail,” she says. Over her career, Jacob has raised over $300 million for various startups in India. She has worked on multiple mergers and acquisition deals, including one of the earliest and largest deals for a digital native business—Ola acquiring its smaller rival TaxiForSure for $200 million in March 2015.

In her 20-year career, she has always preferred working with startups that have a “people first” approach and aren’t in a rush to grow. Though the startup universe is full of ups and downs, “I have been fortunate to have been a part of startups that are built with their heart and human touch,” she says.

Evidently, Jacob is one of the few successful women in the field of finance, a landscape that’s male-dominated not just in India, but globally. Jacob considers herself lucky. “I have never faced anything that is alarming from a gender perspective. Rarely has someone told me they wouldn’t talk to me and would prefer having a conversation with a male colleague instead.”

The 42-year-old feels it could be because she has been very choosy in deciding who to work with—and throughout her career, most preferred focussing on individuals over gender. Jacob has never found the need to ask for special treatment as a woman either. “Once you stop seeing yourself through a gender screen, you will always have the confidence in being able to do anything you want.”

Check out our end of season subscription discounts with a Moneycontrol pro subscription absolutely free. Use code EOSO2021. Click here for details.