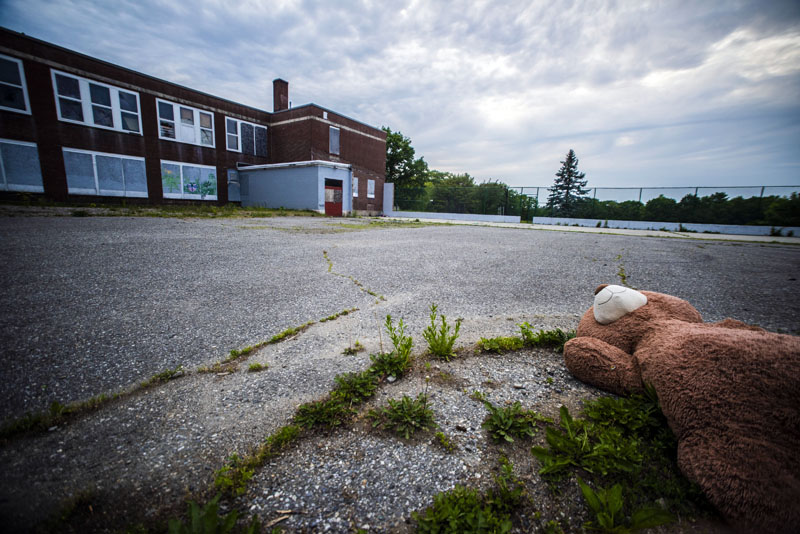 An abandoned teddy bear lay in the parking lot behind the A.D. Gray School in Waldoboro on Tuesday, June 8. Voters backed the plan by Volunteers of America to convert the building into affordable senior housing during the annual town meeting by referendum on Tuesday, June 8. (Bisi Cameron Yee photo)

Waldoboro voters supported selling the A.D. Gray School to Volunteers of America during the annual town meeting by referendum on Tuesday, June 8.  The nonprofit organization plans to repurpose the building as affordable senior housing.

In November 2020, Waldoboro voters indicated their support for the transfer of A.D. Gray to Volunteers of America for $1 by a more than 4-to-1 margin in a non-binding referendum.

During a town-sponsored forum on May 13, representatives from Volunteers of America said that seniors with incomes from $25,000 to $35,000 are the target population, and the multiple funding avenues they will seek for the project have age and income requirements.

The A.D. Gray Park coalition, a group of interested parties that proposed removing the building and using the approximately eight-acre property as a park and community gathering space, formed in December 2020. The coalition gathered 350 signatures from registered voters to get the park question on the June ballot.

Volunteers of America plans to use the existing two-story building and add a taller three-story wing to the back. The final structure would be 31,074 square feet with 32 two-bedroom units of approximately 600 square feet.

A payment bond to protect the town if the project falls through, as well as any payments in lieu of taxes that would benefit the town financially, will be finalized in an upcoming option agreement between the nonprofit and the town.

“The park coalition succeeded in ensuring the citizens of Waldoboro were given a choice in determining the outcome of this property,” Surran Pyne, spokesperson for the A.D. Gray Park Coalition, said in an email on Wednesday, June 9. “A selfless effort was made, and unlike Volunteers of America, the park coalition has no business purpose in the property, other than the well-being and future of our town. It entirely is possible Volunteers of America will not meet its goal, in which case the town will need to, once again, decide what will happen to this intown property.”

Pyne said the coalition’s effort will “remain an example that it is possible for citizens to join together and give each other opportunities to be actively engaged in supporting their community.”

Incumbent Abden Simmons will retain his seat on the Waldoboro Board of Selectmen for a third three-year term with 511 votes. Newcomer William Pratt received 520 votes to fill the seat vacated by Selectman Katie Winchenbach, who did not run for reelection. Seth Hall received 260 votes, Kevin Court received 147 votes, and Russell Brazier Jr. received 80 votes.

Pratt said he is glad that the A.D Gray vote has concluded and that the vote in favor of senior housing was decisive.

“The people came together and now the board needs to honor and support their choice,” Pratt said.

He added that he hopes the vote does not preclude the possibility of a park as part of the property and those who were in favor of a park will continue to work toward it.

“There’s a lot of land to work with and Waldoboro sure could use it,” he said.

Incumbent Sandra O’Farrell was reelected to a three-year term on the RSU 40 school board with 408 votes. She will be joined on the board by first-time candidate Jeanette Wheeler, who received 393 votes. Karen Wellman received 375 votes.

Town Manager Julie Keizer said the town will review the tied votes in order to make a final determination for the seat on the committee. Write-in candidates will be asked to serve by the board of selectmen and if they are unable or unwilling to do so, the board will ask those with the next highest vote counts to serve until the seats on the board are filled.

Incumbent Gordon Webster will retain his seat on the utility district board of trustees for another three-year term with 642 votes. Write-in candidate Kevin Barbor received 12 votes for the other three-year term on the board, and will be appointed if he accepts the seat, Keizer said.

More than 800 votes were cast between 8 a.m. and 8 p.m. when the polling place at the town office closed.