Dealing with aging parents can be a challenging experience. Add dementia to the mix, and it can be even more trying. I’ve experienced it first hand and I know it can take a toll on you. 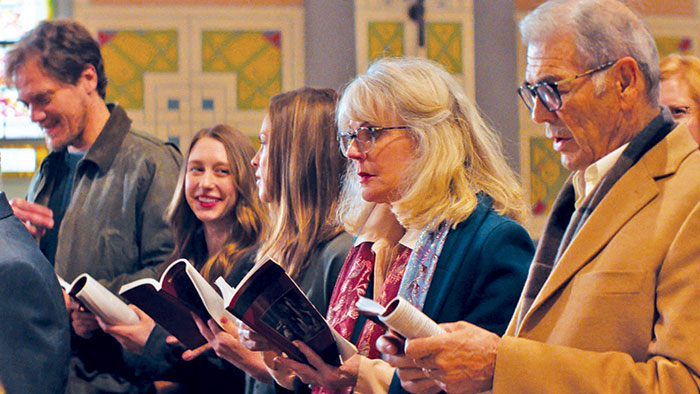 That’s the central theme of this remarkable film. And while it may sound depressing, it’s really a rewarding movie well worth watching.

The opening scene is of Ruth, the talented Blythe Danner, getting up in the middle of the night and wandering off into a major blizzard. Her son Nick (Michael Shannon), calls his sister Bridget, played by Hillary Swank, and asks her to come home to Chicago to help him deal with their mother and her advancing dementia.

Bridget lives in California and hasn’t really been involved with the family in years.

While Nick realizes the need to get his mother into a memory care facility, both his sister and father Burt (Robert Forster) are in total denial. Bridget doesn’t think their mom is that far gone and their dad thinks he’s fully capable of caring for her.

I’m not an expert on dementia, but I’ve heard that it can manifest itself by the person turning either delusional and mean, or innocent and super sweet.

Thankfully, in this film, Ruth becomes more childlike and delightful. Her antics are amusing and add an upbeat feel to the film. It’s just the opposite of the recent movie “The Father”, which I found painful to watch.

Ultimately it was the cast that made “What They Had” such a remarkable experience. Not only was it brilliantly cast and acted, the four leads had a definite chemistry—they really felt like a family.

I especially liked Michael Shannon, who always seems to play quirky characters. And Robert Forster has an ex-drill sergeant air about him, but also has a soft, caring side.

I found myself really caring about what they were going through.  I think you will as well.

★ A real stinker. A movie that is so bad, you’re embarrassed to admit you’ve seen it, but you have to rate it nonetheless.

★★ So-so. Not a total waste of time, but you would have been better off reading a good book.

★★★ Pretty good. In fact, if there weren’t any other movies in your queue, you might watch it again.

While I watch a lot of streaming movies, this column will feature those offered by Kanopy.com.

If you’re not familiar with this great service, it’s offered through the Grosse Pointe Public Library system with your library card. Sign up online in less than a minute, then stream six movies a month for free.

These are high-quality movies you’ll have a hard time finding elsewhere, and include a ton of indie gems I’d never heard of.

For movie trailers, visit youtube.com. If you have any recommendations, feel free to email me at dominmark@yahoo.com. Also, if you’re looking for more movies, be sure to check out my blog: moviejunkiemark.blogspot.com.

7 Ways to Live a Little in Retirement – AARP